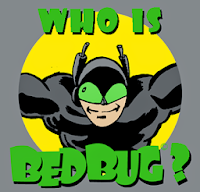 Bedbug is a single-father superhero who fights crime in Silicon City, California... when he's not taking care of his young daughter Elvira.

Bedbug's true identity is Buddy Sprang who, as a boy, dreamed of being a superhero. When Buddy was injured in an accident and confined to leg braces and crutches, he turned his focus to strengthening his mind and body. Setting aside his dream of heroics Buddy turned to computers and the new internet for which he programmed the search engine Fetchit - which he sold for a fortune.

Now independently wealthy, Buddy, aided by his brother Terry, built a high-tech pair of Jumpin' Boots that allows Buddy to walk and jump as high as a building. He is an better-than average fighter who is helped out with an utility belt full of gadgets and snacks! He is a founding member of the hero group, the B-Team.

In the real world, Bedbug was created by writer/artist Scott Rogers when he was six years old and first appeared in Shooting Star Comics Anthology #1 (2002). Bedbug appeared in every issue of that series - which ran from 2002 to 2005 - as well as 2005's Unconventional Special. Bedbug leapt into his own title Bedbug #1 in 2013, and he has appeared in Red Anvil Press' War of the Independents issue #1, Lucky Shot #1 by John Araujo, and the upcoming World Wide Warriors #1 by Dave Ryan and Allan Goldman.