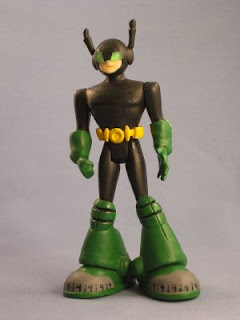 When I'm not creating comic books, making video games or board games, I'm customizing action figures. I made this Bedbug many years ago when I was publishing Shooting Star Comics.

Bedbug was made from a BTAS Nightwing figure, Toy Biz Marvel character's (I don't remember which) hands, a Dragon Ball Z character head and Buzz Lightyear boots. The belt, gauntlets, boot details and antennea were made from kneadatite and the clear googles are bits from a STAS Lex Luthor suit.
I think he turned out pretty good!
Posted by Scott Rogers at 4:23 PM No comments: